First game of Age of Sigmar 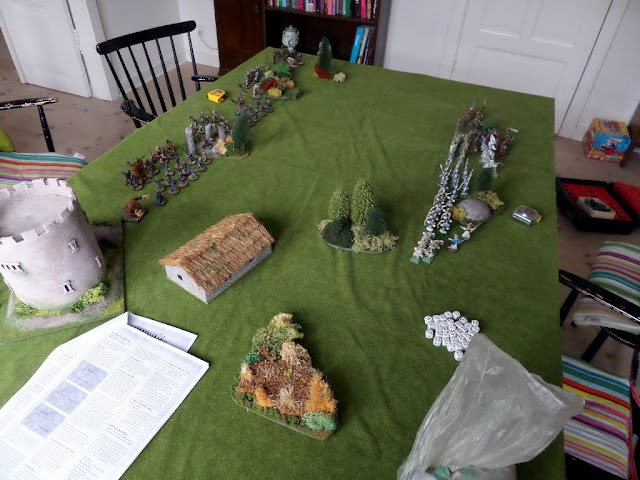 Last night Duncan and I finally got together for a game night, and with all the buzz surrounding it we decided to give Age of Sigmar a go. Both of us were rather skeptical from the get go, but the freedom provided with the army building (i.e. just pick the models you want to use) and the promise of a quick and easy game lured us in to giving it a go.

So having packed a lot of miniatures that have rarely seen the table, I set off to meet up with Duncan at his place and we went through the motions of setting up a game, as per the rules and played with absolutely no modification... except for some units were we couldn't make them fit with the rules given.

For instance I had a Flesh Golem which I counted as a Crypt Horror Haunter - but normally in order to field such a unit I would need to have 3 of the things. Seeing as the rest of the game system relies more on the social agreement of having fun rather than overly competetative list min-maxing, we both agreed that it wouldn't really be a problem. This is what Duncan fielded as his army. A long neglected collection of High Elfs from days of yore when that number of miniatures was all that was required for you to play a game of Warhammer Fantasy Battle. I had never seen them in the flesh and I'm pretty sure Duncan had great fun getting them back on the table. Notice all those damned Princes running around with their Charmed Shield - they're pretty damn hard to get off the table when you yourself don't rely on such magical trickery to win you the battle! 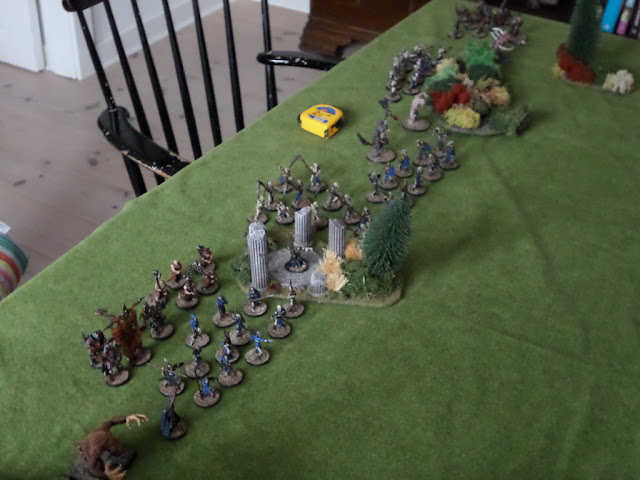 And this is then my hodgepodge collection of miniatures put on for this game. A good amount of Undead (soon to increase, once I get around painting all of my Mantic miniatures), with a couple of "Mercenary" units from by very small collection of Chaos Warriors and Orcs - an alliance of Evil, if you will, led by Niels - the Necromancer. To me, then we might as well have ended the game at that point - I was happy enough to have put all of these miniatures up for a battle - some of them freshly painted and others had been painted years and years ago and only now saw their first battle - such as this Snow Troll that I used as a Gorger in this game: And not to forget these chaos warriors that I had painted up when I had the idea of starting an 8th Edition Warhammer Fantasy army and had to find the army with the lowest model count. Sadly, that never came to fruition (I got burned out almost instantly because of the number of models required - even for a low-model-count army such as this). So here they are then, on the table for the first time as well: 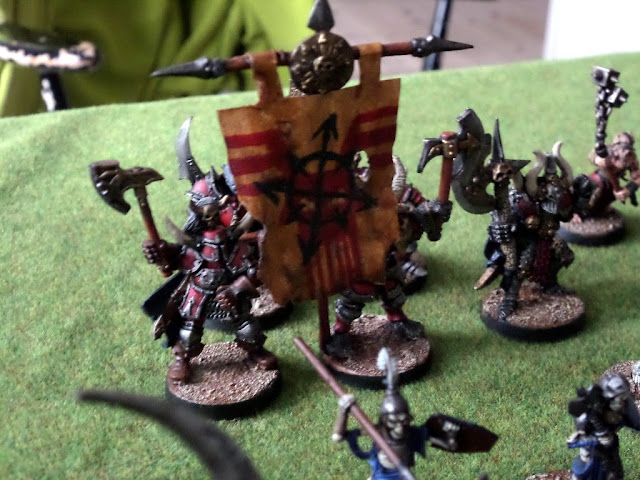 The initial turn saw us manouvering our flanks and slowly moving our centre towards each other. And by turn two we got stuck in. I won the roll-off for going first in turn two and was already within charge range of most of his units, and thus the undead horde shambled to war. 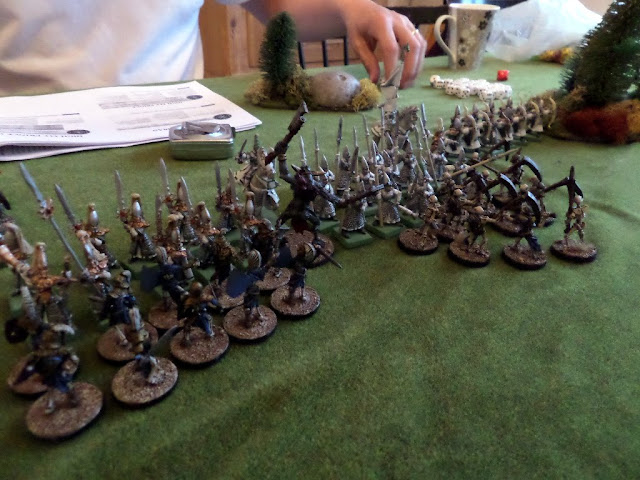 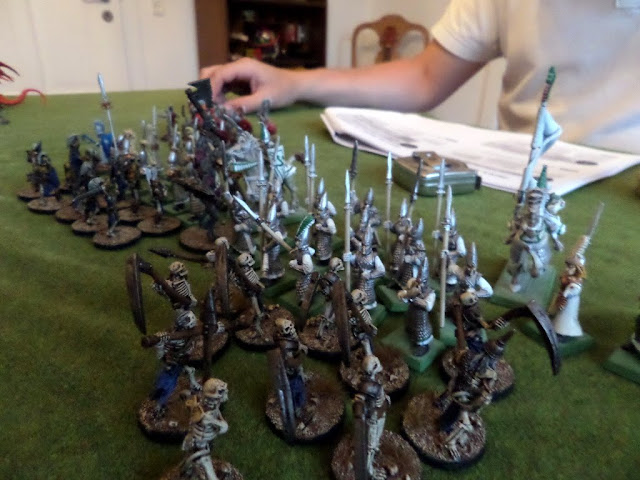 However, I hadn't enough models in any of the Skeleton Warrior unit to get their bonuses, but even then they stood their ground for a turn or two. I could easily see how you could completely overwhelm an opponent with these units - so it really does require you to think about what kind of experience you want out of the game. If you just want to win at all cost, you could easily do so. But if you want to have some fun, pushing around lead/plastic miniatures on the board and invent a narrative as you go along, then it's just as easy to go for this with minimal fuss. 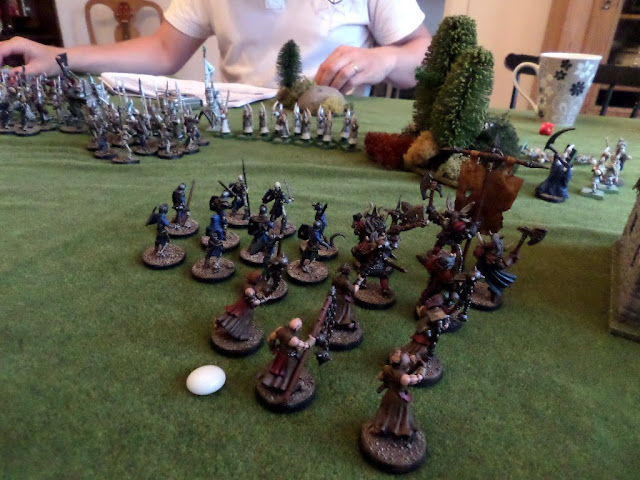 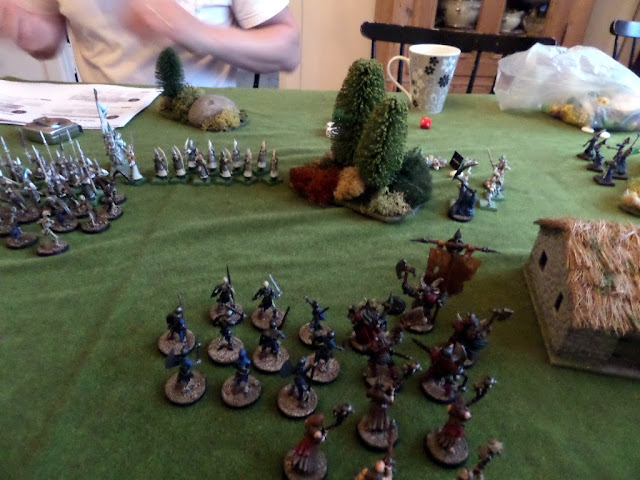 With my center slowly falling apart I was doing what I could to get my right flank up to engage his left flank that was slowly coming apart. Those White Lions are pretty great but they couldn't really keep the flank secure. Unfortunately, my Chaos Mercenaries weren't overly interested in moving forward at this critical juncture - which meant that his center broke through! 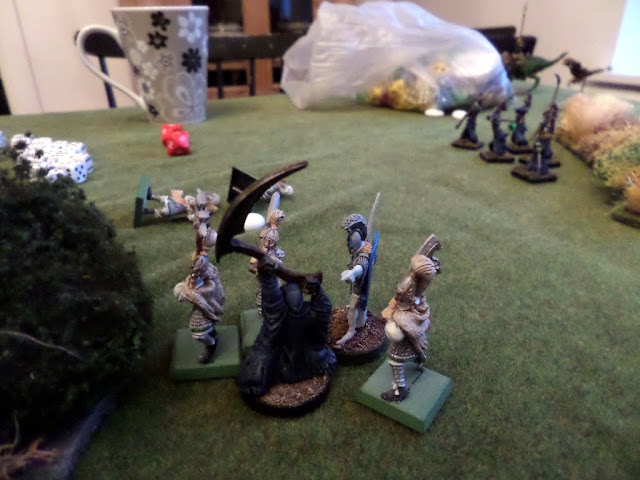 My Cairn Wraith, along with some dismounted Hexwraiths out there on the far right, was doing what they could to get through and start mincing up his right flank. But alas, the Prince joined in on the battle and made short work of the Cairn Wraith - and then, with Duncan having initiative the next turn, he then proceeded to engage the Hexwraiths and stalled my flanking. 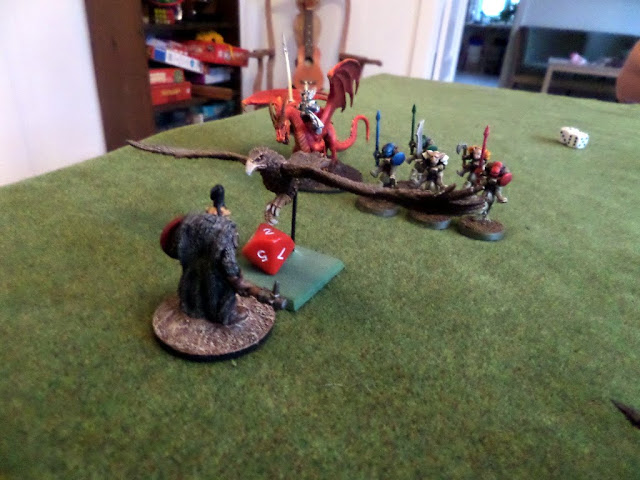 Meanwhile I tried, as best as I could, to stall his right flank going forward, with my Black Orc Big Boss (the ogre miniature here) taking out a Great Eagle, then surviving a round of fighting the Dragon... which then proceeded to make mincemeat out of him. Sad to see him go, but then again - it was to be expected - as great as a Orc Boss is, he isn't really kitted out to take care of a Dragon on his own! 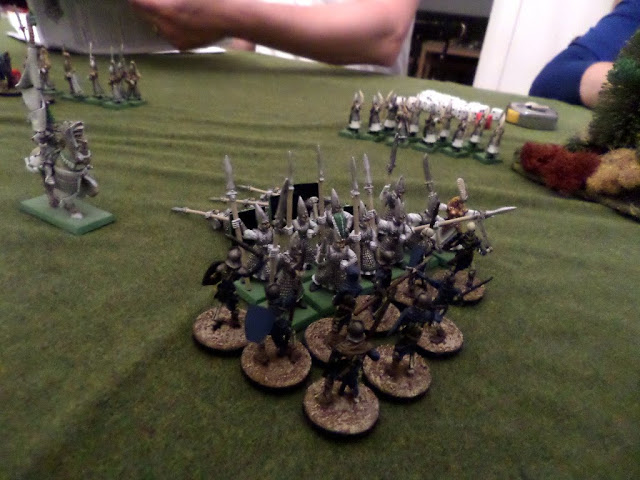 As for the actual game, then it was really a great experience - so much so that it automatically triggered an idea in my head that I'm currently working on. It flowed really great and was easy to get into and play - but not so easy that it was devoid of any tactical decisions. In fact, there was a lot of tactical considerations in the game - provided, I think, that you play with "balanced" armies. Duncan had a Dragon which was, basically, impervious to most of what I had brought to the table. He wasn't himself overly keen on taking it but I did encourage him as he had just painted the thing. 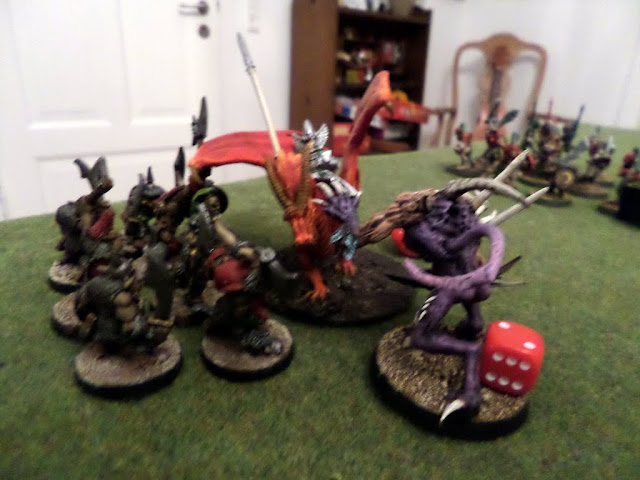 Alas, it was a hard nut to crack - I simply didn't have any Mortal Wound causing units around that I needed to take care of it. The bloody thing had a Save of 4+ with a Charmed Shield, meaning that it would re-roll any failed Saves. Oh and it had something like 14 wounds as well!

But all in all - I had great fun! The game flowed really well and the freedom of choice - i.e. just put some miniatures on the table - was really welcomed. I'm pretty sure that was the main selling point for me, coupled with the fact that it was free to play as well. I for one welcome this new edition, if you can call it that, to Warhammer Fantasy and I'm hopeful for the future of the hobby with this new kid on the block. There's so much potential in this game for narrative scenarios and, provided that you play with likeminded people, then there's a ton of fun to be had by simply putting your miniatures on the table and get a game going!